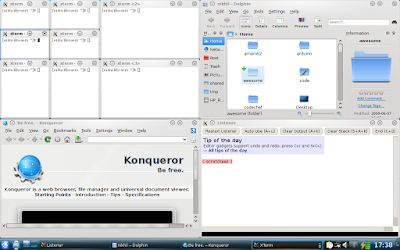 In the quest to implement tiling in KWin, I've decided to use binary trees as an internal representation. This morning, I hacked on it to produce a decent prototype, just to check if the idea would work well enough, without introducing too much complexity in the code. At the moment, it does tend to crash or have repaint issues once in a while. But it works, and it does what tiling is supposed to do. Of course there is a lot to do yet. Moving and Resizing remain particularly icky because so many choices about what is good as a default, what is expected, how to implement it, will have to be made. If you are adventurous enough to try the kwin-tiling branch, do not move the windows, or basically abuse it in anyway :)